The theme of the video installation is the “reality of media” in compressed form.
Images of people grabbed from television constitute the main subject of the artistic research. Short video fragments are combined in a sort of collage cutting, which brings them into a strange situation, subverting their meaning and thereby disclosing new possible views of the world of media. The choice of the video fragments, the cutting techniques, the insistent repetition of the sequences and their relationship to music and rhythm allow the observer to “read between the lines”.

The video installation requires five synchronized DVD players and five video projectors placed side by side in order to build a single video screen of ca 48 x 7 ft (15 x 2.2 m). Five video sequences are played as a loop (duration: 8’45”). The serial sequence of events of the five large images, which are fused through the projection, aims to stretch the audiovisual time into space and at the same puts the observer in the situation of being in-between. 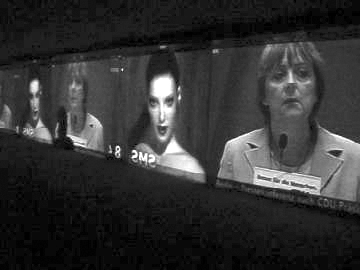 The music requires a five-channel (4.1) surround sound space. It develops acoustic forms which emerge from the “nothing” and orders perception to synchronize the pictures with the sounds before the sounds finally disappear again into the “nothingness”. This process repeats itself several times. The coordination between eyes and ears, necessary for the synchronization between image and sound, is supported by the granular qualities of the sounds and the rhythmically marked composition. The contrast opposing the three melodies, which appear at a certain moment, and the mostly noisy sounds of the composition, emphasize the ambiguity between familiarity and strangeness.